The holy abode of Goddess Yamuna is situated near the foot of Kalind Parbat (peak) and on a side of Banderpoonch Parbat. Nestled in the intimidating Himalayas, Yamunotri temple is believed to be constructed by the king of Tehri, Naresh Sudarshan Shah in 1839. Yamuna River jets down from one side of the temple, which houses Goddess Yamuna in the form of a black marble idol. Ganga Devi too finds her place, in white stone, by the side of Yamuna.

The temple of Yamuna closes its portals as winter approaches on Yama Dwitiya (second day after Diwali or on Bhai Dooj). Devi's winter address is Kharsali village where she reaches in a palanquin and will remain for the entire period of winters. On Akshaya Tritiya the goddess comes back to grace Yamunotri again. Both closing and opening ceremonies of the Yamunotri shrine are brought about with celebrations, elaborate rituals and vedic chants. 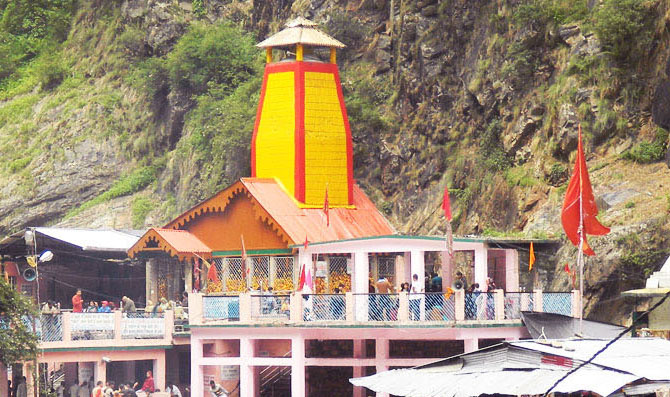 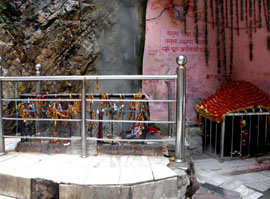 It is a reddish-brown rock near the Surya Kund which needs to be worshipped before offering reverence to the main deity, Yamuna maa (mother). According to Skanda Purana, with a mere touch of the sacred rock one can attain spiritual liberation. 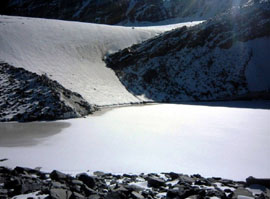 This kund is situated 10 kms away from yamunotri. This is the actual place where Yamuna rises and an extremely difficult journey covered with ice. The water of the glaciers gathers in this lake. On the banks of the lake are naturally carved slate stones. 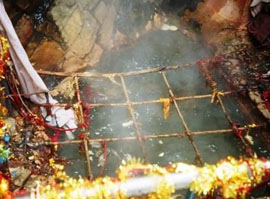 Surya Kund is the most important and sacred thermal spring of Yamunotri amongst the cluster of thermal springs in the vicinity of the temple which flows into numerous pools. The pool is named after Surya or the sun god, the father of Yamuna. 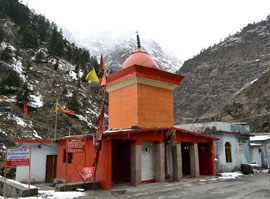 Gangotri Dham, located at the height of 3,100 meters (approx.) on the Himalayan range in Uttarkashi district of Uttarakhand, holds a very special place in the hearts of Hindus. It is one of the four sacred and important pilgrimage sites of Chota Char Dham Yatra in Uttarakhand. Amid all the natural beauty and grace which the mountains and altitude of the place affords, what makes Gangotri one of the holiest places is its intimate connection with River Ganga (the Ganges).

Ganga Maa the much revered deity of Hindus, originates from the Gangotri glacier at Gaumukh which is some 18 km from the Gangotri town. It is said that Goddess Ganga came to earth in order to wash away the sins of King Bhagirathi's ancestors. From the folds of mythology till the present time, Ganga River has always been a sacred source of purity for the mankind. 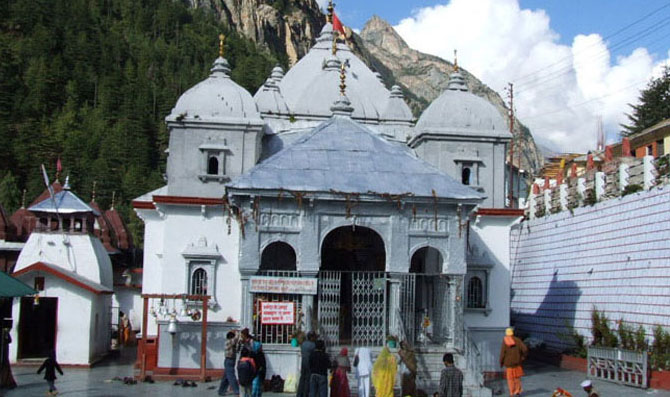 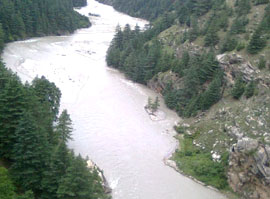 Further downstream,10 km from Gangotri, is the picturesque forested halting place of Bhaironghati. There exists a small temple of Bhairon, appointed by Shiva to safeguard this region which gives the place its name. 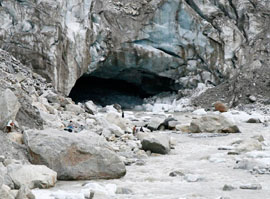 The Gaumukh glacier is the source of Bhagirathi (Ganga) and is held in high esteem by the devotes who do not miss the opportunity to have a holy dip in the bone chilling icy water. It is 18 Kms. trek from Gangotri. 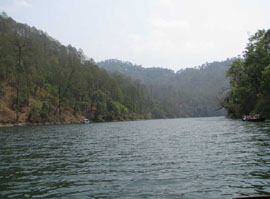 Sat-Tal, meaning seven lakes, is situated just above Dharali, 2 Kms. beyond Harsil. The trek of about 5 Kms. is rewarding as this group of lakes is situated amid beautiful natural surroundings. It also provides lovely camp sites. 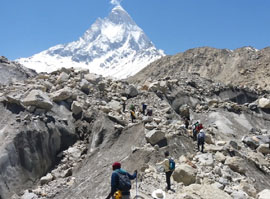 Located at an altitude of above 4460 mts above sea level, Tapovan is a beautiful meadow that surrounds the peaks. Enriched with lovely flowers, a climb to this meadow sharpens the images of the surroundings peaks and ranges.

An imposing sight, standing in the middle of a wide plateau surrounded by lofty snow covered peaks. The present temple, built in 8th century A.D. by Adi Shankaracharya, stands adjacent to the site of an earlier temple built by the Pandavas. The inner walls of the assembly hall are decorated with figures of various deities and scenes from mythology. Outside the temple door a large statue of the Nandi Bull stands as guard.

Dedicated to Lord Shiva, the exquisitely architecture Kedarnath temple is considered to be more than 1000 years old. Built of extremely large, heavy and evenly cut gray slabs of stones, it evokes wonder as to how these heavy slabs had been handled in the earlier days. The temple has a "Garbha Griha" for worship and a Mandap, apt for assemblies of pilgrims and visitors. A conical rock formation inside the temple is worshipped as Lord Shiva in his Sadashiva form. 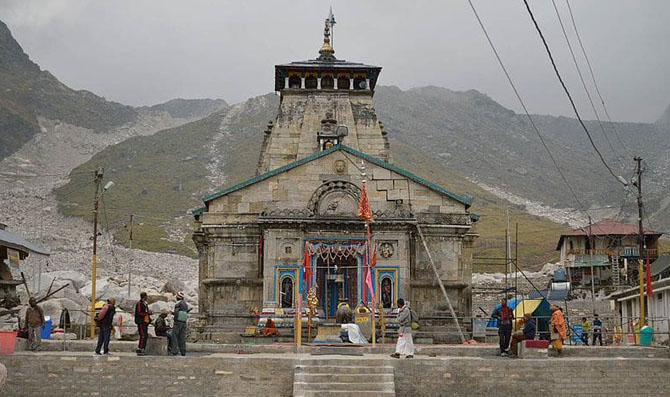 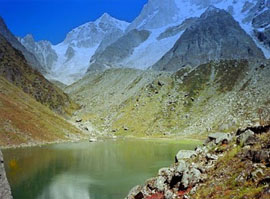 Chorabari Tal is a beautiful lake situated 3kms ahead of Kedarnath . Chorabari Tal is a pristine lake which shows the reflections of the gigantic Himalayan peaks. The trek is easy but be careful while crossing the waterfall in between. 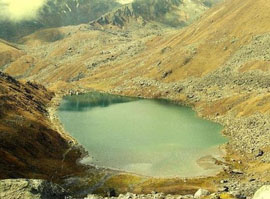 Vasuki Tal is one of the holiest places in India. this place is dotted with Hindu temples. Besides these holy shrines, Kedarnath offers a picturesque ambience that grabs attention of lots of tourists. It is one of the beautiful sites in Kedarnath. 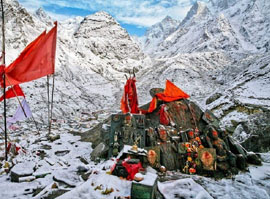 This Temple is one of the most popular temples in Kedarnath. This temple is dedicated to God Bhairav, who is supposed to be the main gana of Shiva. The weapon of the Lord is Trishula and his vahan is a dog. The temple is also known as Kshetrapal. 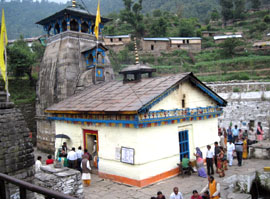 According to legend, this was the place where the wedding of Lord Shiva and Parvati was solemnized. In front of the Shiva Temple is an eternal flame, which is said to be a witness to the marriage. It can be reached by a 12 km from Sonprayag.

The temple at the bank of Alaknanda River is a hot water spring known as "Tapt Kund", a bath in which is very refreshing to all travellers. Dedicated to Lord Vishnu, the temple of Shri Badrinathji, is 5 m high, built in the form of a cone with a small cupola of a gilt bull and spire. The temple opens every year in the month of April-May and closes for winters in the third week of November. Even though legend dates the temple back to the Vedic age, Guru Adi Shankaracharya has established the present temple.

The Badrinath temple was constructed and renovated by Shankaracharya some time in 8th century during his pilgrimage to Badrinath Dham and Kedarnath Dham after he had established 'Jyotirdham' in Joshimath. Narada Kund, Surya Kund, Basudhara, Mata Murti and Charan Paduka are the other holy places of attraction for the large number of pilgrims who visit Badrinath Dham every year. 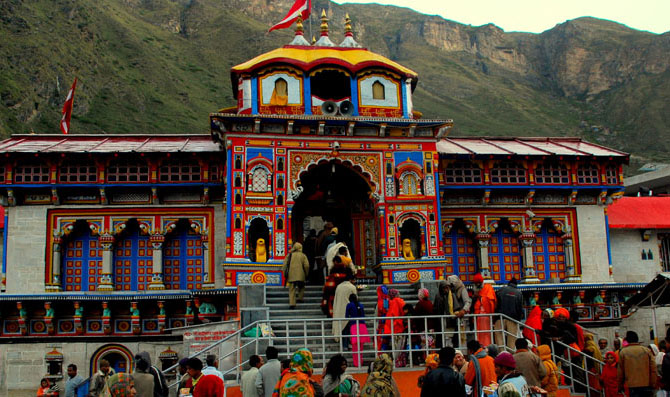 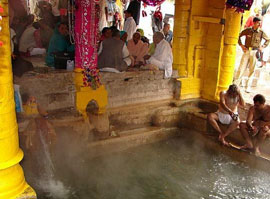 Tapt Kund is a natural thermal spring where the devotees take a holy dip as it is very important to take a bath before visiting a temple. It is also believed that the kund has medicinal values and can cure allergies of the people. All the devotees take holy dip in the natural hot water together with unknown people. 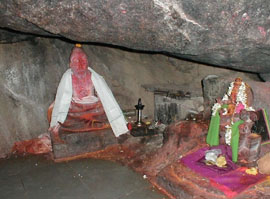 Vyas Cave is an ancient cave that is situated in the Chamoli district of Uttarakhand, just few kilometers away from the famous Badrinath shrine. It is believed that it is this place where sage Vyas composed the Mahabharata epic with the help of Lord Ganesha. This cave is situated in the Mana village in Badrinath. 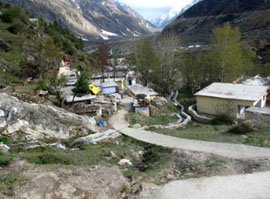 Mana is very close to Tibet border and it is one of the last villages of India. Most of the tourists who visit Badrinath also come to see the end of the road at Mana. Mana is inhabited by Indo-Mongolian tribes often called as bhotias. Mana is situated 3kms from Badrinath. 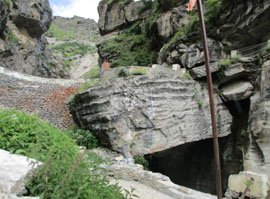 Enthralling place with mythological importance. This is the place where Bheem threw a big massif rock to make a path joining two mountains so that Draupadi could walk easily on it. Saraswati River is coming from between the mountain with immense force to merge with the water of Alanknanda River.